On the 29 of September our class went on a hike. We were going to Prince William’s Seat. We went there on a bus. I was sitting in the front with Aaron MD. Cuba and our teacher Mr. Lane were behind us. When we got there it was really sunny. First we had to go down to cross a bridge and then we started going up. At the bottom of the bridge there was a dead sheep. Poor thing. 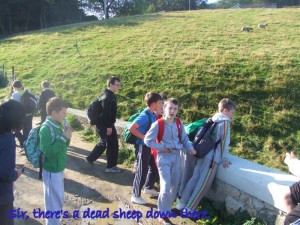 While we were going down our principal Mr. Booth showed us some blackberries and I ate one. It was really sweet. We were going up a rocky path (not that there were big rocks but small ones crushed and laid on the ground). It was really warm; probably more than 20 degrees. Our first lunch stop was on small rocks. 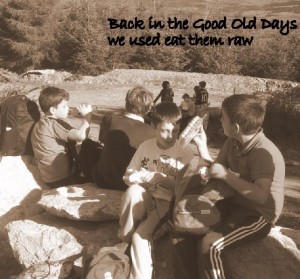 Then we set out further. It was like the rocky path would never end. But finally after 30 minutes we came to another stop. We went further on. I thought I heard a waterfall but when we went through cut-down trees I found out that it was the trees making the waterfall sound. We went over a fence and through a small path. We kept on going up. There were some puddles on the ground but you could get past them no problem. As we came out of the narrow path we went on another but this one was not that flat as the others. It had big chunks of rocks in it. When I was half way up it I fell and thought I broke my ankle. It was hard to walk but the pain stopped. When I thought we were finally at the top guess what? We had to go up another path but luckily this was the last one. Although I went through the small bushes I was happy and I got a shot of energy by thinking it was the last one. When we went up to the Prince Williams Seat it was really windy. If you put your jumper out in the wind and let go it would probably fly away. 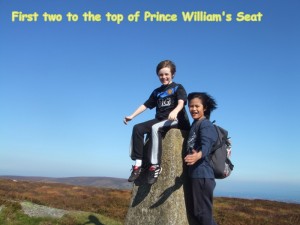 Well anyway, we had our lunch there. When we were coming down it got I think 1 degree cooler. We went down a different route than we came up. This path was just big gigantic rocks that you had to walk down on. We got to a stop and we made a fire. I made smoked ham. When we were coming down it wasn’t that bumpy although there were small rocks on the path. I found a stick to help me walk. When we were down we had to go through a jungle. Well it wasn’t technically a jungle; it was a place where there were loads of bushes. They weren’t spiky but my hair was getting caught in them. Finally we found the bus. I took my stick with me on the bus. It was great. This is the best hike we had so far.

One Reply to “Hike to Prince William’s Seat”

Very good entry Dorian, looks like you had a great day. You were so lucky with the weather too!