Our 5 a side team reached the regional final in Irishtown park before losing unluckily in the final to a breakaway goal. We won all of our group games and progressed to the final after an epic penalty shoot-out.

The squad consisted of Darragh, Evan, John, Adam, Tadhg, Oisin, Joshua and Dylan. They did themselves and the school proud. 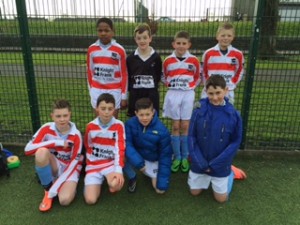