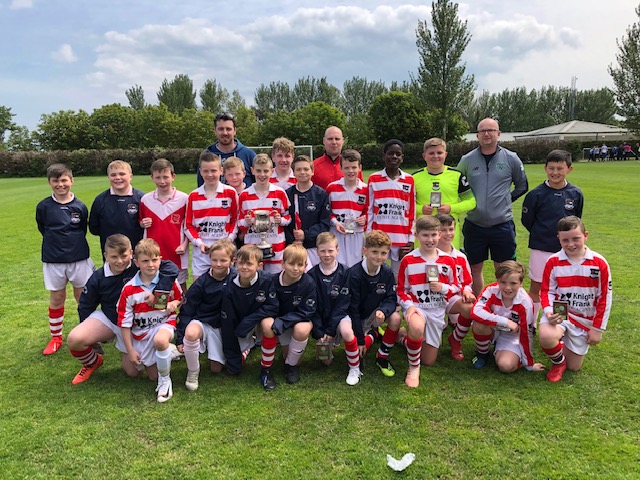 The footballers won the Pegasus Cup for the first time yesterday. We had never even reached a final before this so it was a remarkable achievement for the boys. What made it even more remarkable is that we are a Division 4 side and our opponents, Balrothery, were from Division2. Balrothery were big, strong, fast and skillful but despite everything being stacked against us we never gave up and managed to win the game against all odds.

Cameron and Harry both came close to scoring before Harry volleyed in a great cross after Luke and Stephen combined on the right following a strong run from Darragh. Balrothery responded well to going behind and Josh made a couple of good saves to keep them at bay. The pressure told however and they equalised before half-time despite Josh saving their first effort on goal.

It was level at the break but Balrothery came at us strongly early in the second period and we had to weather a storm for quite a while. Jack, Jason, Calum and Murphy dealt admirably with every Balrothery attack and Lucas was always on hand to save us when they breached our defence. Cameron had to come off injured and Zac from 3rd class came on and wasn’t fazed by the occasion as he got stuck in straight away. As the half went on we came back into the game a little more and began to cause them a few problems at the back but their defence was very strong and fast. They somehow prevented Stephen and Luke from getting shots in and then their keeper saved from Murphy after a goalmouth scramble from a corner. It looked as if we were heading for extra-time and penalties but Harry had other ideas. He summoned up the energy for one final run at their defence. The defenders were expecting a shot but instead he cleverly pulled the ball across for Luke to take a touch and fire a goal into the back of their net to cue wild celebrations. The drama wasn’t over yet however; deep into injury time their star player finally escaped our shackles to break clear with only Josh to beat. He arrowed a shot towards the top corner but Josh sprung like a tiger to claw the ball out of the air and prevent a goal. It’s a save that will live long in the memory and ensured we emerged victorious from a fantastic game of football.

The final whistle went and our players and supporters celebrated a marvelous victory. After such a clean and sporting match it was wonderful to see our players commiserate with our distraught opponents. This team show wonderful qualities of perseverance, teamwork and heart but their best facet is their great attitude to sport. They are all great ambassadors for our school and excellent role models for the younger pupils here. We are very proud of them and they are a credit to their families for the way they conduct themselves.

Every player performed to the best of their abilities but a special mention has to go to Jack for such an assured and consistent display against such formidable opposition. 25 boys have played for the school team this year and all will receive a medal for their valued contributions to this successful season.